Time for our next Focus On... series installation dedicated to the wonderful and ever-growing collection of the Duchess of Cornwall. Before posting articles on actual jewels, a little introduction is in order. 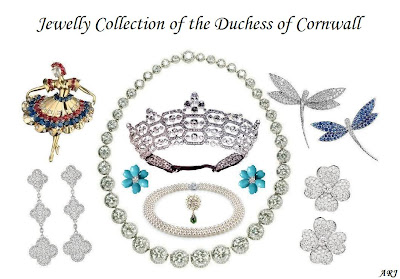 Not all jewels that are to be covered actually belong to the Duchess. Some of them, such as the Delhi Durbar, Boucheron, and Teck Crescent Tiaras are a loan from Her Majesty. Others, such as the Saudi Parures, may have been gifted to Camilla but they don’t actually belong to her (gifts received on official engagements automatically become Crown property and are on a lifelong loan to the person they were gifted to).

The jewels the Queen loans to the Duchess are mainly from the late Queen Mother’s collection. Mind you, Camilla has also worn pieces from the collection of most other British Queens including Victoria (the Diamond and Sapphire Brooch), Alexandra (the Heart-Shaped Amethyst Brooch), and Mary (Delhi Durbar Tiara).

The jewels that come from her family collection may also sometimes have a royal connection through Alice Keppel, the most famous of Edward VII’s favourites and Camilla’s direct ancestress. One such piece is the Keppel tiara/necklace – a gift from King Edward. Prince Charles has also bought back a lot of Keppel pieces sold over the years for Camilla.

The fact the Duchess has worn quite a few pieces from the famous Greville bequest may at first glance seem insignificant: after all, Camilla has use of many of the jewels that formerly belonged to the Queen Mother. But there is actually another reason too - Mrs Greville was a close friend of Sonia Keppel and a godmother to Sonia’s daughter, Rosalind Cubitt. The latter is of course the Duchess of Cornwall’s mother. Although Mrs Greville left most of her immensely valuable jewellery collection to Queen Elizabeth (The Queen Mother), she didn't forget her goddaughter either. In her will, she specifically mentioned Rosalind: “...to my goddaughter Rosalind Cubitt, a legacy of £500, my cultured pearls, and all my wearing apparel including my laces, furs and all my trinkets”. I wonder whether we have seen Camilla wearing some of those trinkets without realising.

It is also interesting to look at the Duchess’s usage of jewellery since her marriage till now (thank you to Muriel for drawing my attention to this). Although immediately after Charles and Camilla’s marriage a lot of people predicted she’ll wear understated jewellery as befitting a “mere” second wife, the exact opposite happened. During the first years of her marriage, Camilla wore some very impressive pieces from the Royal Collection. The very first tiara event she attended (banquet in honour of the Norwegian Royal Family) had a mega surprise in store – the reappearance of the magnificent Delhi Durbar Tiara which hadn't been worn in ages.

If anyone was still uncertain how the Queen felt about her daughter-in-law’s position in the Royal Family, all doubts were quashed when the Duchess of Cornwall accompanied Queen Elizabeth, Prince Philip and Prince Charles to The Queen’s Banquet for Commonwealth Heads of Governments in Uganda, in November of 2007. Wearing the stunning Boucheron Tiara, all five rows of the Greville Diamond Necklace, and the Queen’s Family Order on her shoulder, Camilla looked every inch a queen-in-waiting, managing to overshadow even Her Majesty who didn't exactly lack in jewellery department herself. Undoubtedly, that had been Queen Elizabeth’s intention because all those jewels had to be borrowed with her knowledge and consent. The message sent was very clear: make no mistake, whatever concessions were made for the marriage to take place, this is the second lady in the Kingdom and a future Queen.

As the British public gradually warmed to the Duchess of Cornwall, there was no longer a need for such statements. And so Camilla started wearing more delicate jewels more in line with her understated style, mostly from her own collection. Unfortunately, that also meant that after such promising début of two hugely important tiaras in a short period of time, they remain the only two we have seen the Duchess wear so far (from the Royal Collection, that is). It is known that the Queen has also loaned the Duchess the Teck Crescent Tiara but we are yet to see it actually worn. For now, Camilla infallibly wears her Boucheron Honeycomb for all tiara events.

And now after this long post, let us enjoy the jewels without further ado. You will always find the already-covered list of jewels of the Duchess here. Enjoy!

The list of the Duchess's Jewels covered so far:
Turquoise and Diamond Demi-Parure
Keppel Ruby and Diamond Tiara

Must de Cartier Vermeil Watch
Posted by Unknown at 8:59 AM

Email ThisBlogThis!Share to TwitterShare to FacebookShare to Pinterest
Labels: Duchess of Cornwall's Jewels, Focus On...