These lovely daisy brooches come from the collection of Princess Louise, Duchess of Argyll. 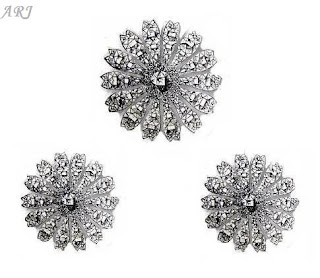 There are three brooches, one large and two smaller ones. They were made by Garrard and are encrusted by diamonds set in white and yellow gold.

Princess Louise was the second youngest daughter of Queen Victoria and Prince Albert. The diamond daisy brooches were a present to Princess Louise from three of her siblings – Prince Arthur, Prince Leopold and Princess Beatrice – on the occasion of her marriage to the Marquess of Lorne (then heir to the Dukedom of Argyll).

On her wedding, Louise wore the daisies in her hair to hold her lace veil in place. The marriage itself was a historic event since it was the very first time a daughter of the Sovereign married a British subject with the Monarch’s blessing since the marriage of Mary, Queen of France (Henry VIII’s sister) and Charles Brandon, Duke of Suffolk (and I should add that in that case the Monarch's blessing was ex post facto, as it were).

The Duchess of Argyll remained close to her family members and was one of Edward VII’s favourite sisters. Her favourite sibling was Prince Leopold, Duke of Albany and she was devastated by his death in 1884. Her favourite family members among the younger generation were the Duke and Duchess of Kent.
It therefore came as no surprise that in her will the Duchess of Argyll left several jewels of historic or sentimental value to Princess Marina, Duchess of Kent. Princess Marina occasionally wore the brooches together and separately, in a traditional style or pinned to her hats. Marina’s daughter, Princess Alexandra, also wore the brooches in her youth.

Princess Marina left the daisy brooches to her son, Prince Michael of Kent. The current owner is his wife, Princess Michael, who can often be seen wearing the daisies. Marie Christine had them slightly modified so now the smaller brooches can also be worn as earrings. Princess Michael has always been original with her jewellery, so the daisies can be worn as brooches, earrings and as a pendant of a necklace (on a black ribbon).
Princess Michael even mounted them on a diamond piece (possibly aigrette) as a tiara-like piece. I have to say though that while I applaud her inventiveness, this “tiara” definitely didn't work for me.

If you are interested in Kent Jewels, you are in luck because we have been covering Kent Jewels the whole week. Why not check out the list of Kent Jewels already covered here (scroll to the end of the post)?
Posted by Unknown at 12:00 AM