Jewel of the Day - March 31: The Queen wears the Jardine Star Brooch

We début our “Jewel of the Day” series with one of the Queen’s most worn brooches as of late. For today’s Sunday Easter Service, the Queen wore the beautiful Jardine Star brooch. 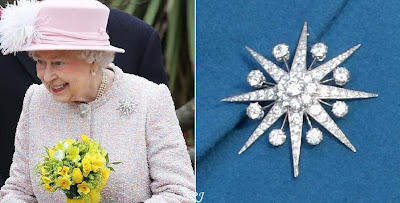 Don't forget to check the other jewels worn by Queen Elizabeth in 2013 (so far), which includes a handy "Leaderboard" of her brooches! At this point, the Gold Dahlia Brooch is in the lead, although the Jardine Star isn't far behind!

And now a couple of words about the Easter Service. The Queen, along with members of the Royal Family, always attends the traditional Easter service at St George’s Chapel in Windsor Castle. As per tradition, they attended “The Martins Service” at the Chapel, which started at 10:45 am and was conducted by the Dean of Windsor, the Right Reverend David Conner.

Usually, she is joined by both immediate and extended family members. This year, for instance, the Queen and the Duke of Edinburgh were joined by the Duke of York, the Earl and Countess of Wessex, Lady Louise, Princess Beatrice and Princess Eugenie. Queen Elizabeth, Prince Philip, Sophie and Lady Louise were all driven to the chapel, while other members of the Royal Family opted to walk.

The Prince of Wales, the Duchess of Cornwall, the Duke and Duchess of Cambridge, and Prince Harry weren't present at today’s service. Traditionally, Prince Charles and Camilla spend the day privately at Clarence House or Highgrove. In past, they were joined by Prince William and Prince Harry. However, since his marriage, William spends Easter separately with his wife: this year, they were in Wales.
Posted by Unknown at 6:26 PM

Email ThisBlogThis!Share to TwitterShare to FacebookShare to Pinterest
Labels: Jardine Star Brooch, Jewel of the Day