Some of my favourite jewels in the British royal collection have Russian provenance, including this magnificent sapphire choker.

The choker consists of four strands of pearls (a total of 164 of them) with 20 diamond-encrusted vertical bars between every two or three rows of pearls. Each diamond bar is studded with five brilliants. The large sapphire in the middle is surrounded by two rows of brilliant-cut diamonds.

This is a pretty versatile piece too since the necklace can be converted into two bracelets, while the pendant can be worn as a brooch. To the best of my knowledge, none of the royal ladies who wore this piece have done so though.
The sapphire and diamond pendant of the choker once belonged to Empress Maria Feodorovna of Russia, mother of Emperor Nicholas II and sister to Queen Alexandra (Edward VII’s consort). The Empress had one of the most valuable jewellery collections of her time, including a magnificent sapphire parure of rare quality and beauty.

While it is definite that the pendant comes from Maria Feodorovna’s collection, it is not certain whether it had at any time been part of the sapphire parure. However, the lower pendant of the necklace (which was detachable and could be worn as a brooch) does look strikingly similar to the current pendant.
Following Maria Feodorovna’s death in exile in 1928, her jewels were sold in England by Hennel & Son. Queen Mary purchased the pendant, already in choker setting, in 1931. She wore it quite often, usually with one of her sapphire tiaras and strings of pearls.

After Queen Mary’s death in 1953 most of her vast jewellery collection was inherited by Elizabeth II, including this necklace. Queen Elizabeth has never really been a fan of chokers so she only wore it a couple of times in her youth. 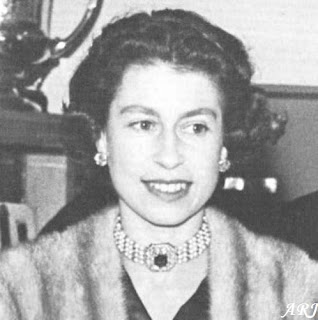 The choker was saved from oblivion by the Princess Royal who started wearing the necklace soon after her marriage  Princess Anne isn't a particularly prolific jewellery-wearers but she has made an exception for two of the chokers in her collection – this one, and the much more often-worn smaller pearl and diamond choker.

The choker is part of the Queen’s personal jewellery collection so whether it is a loan or a gift to Princess Anne isn’t known. However, since Anne started wearing it no one else has, which makes me believe it is more likely to be a gift or at the very least, a lifelong loan. The Princes has worn the choker on many occasions, from tiara to daytime events.

I am a huge fan of chokers and sapphires so this piece is a win-win for me. Which is why part of me is really saddened it may have left the main royal line (assuming it was a gift). However, I can also understand the Queen’s desire to give her only daughter some really nice pieces, seeing as most of the important jewels will be inherited by the Prince of Wales.
Posted by Unknown at 4:51 PM