Time to cover one of the most under-appreciated parures of all times - Queen Desideria’s Malachite Parure. 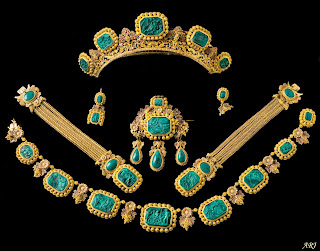 The malachite parure consists of a tiara, necklace, brooch, two bracelets, and a pair of earrings, all set with carved malachite. The cameos carved on the stones represent classical scenes. For instance, the cameos in the necklace depict Asclepius (god of medicine) and Hygeia (his daughter, goddess of health), Hercules (the Ancient Greek hero) and Hebe (daughter of Zeus and Hera who becomes Hercules’s wife). The central cameo of the tiara symbolises day, while the central stone of the brooch depicts the night, and so on.

The centrepiece of the tiara is undoubtedly the tiara; it bears the mark “SP”, which suggests it was created by the famous Parisian jewellery Simon Petiteau, probably in 1820s or 1830s. The necklace is 44.5 cm long and consists of eight malachite cameos, all set in gold frame, with delicate floral motifs in-between.
The two bracelets are identical bar for the carvings on the cameos. Each consists of four thick gold threads with two oval malachite stones (without carvings) at either end. A further malachite (with carvings) cameo serves as a clasp. The brooch consists of a large cameo in gold frame with an almost identical but much smaller cameo directly above it. From the larger stone three pear-shaped malachite pendant drops hung. The earrings consist of a small cameo from which a larger cameo is suspended; one of them is damaged and only the smaller cameo remains.

The parure originally belonged to Queen Desideria of Sweden and Norway (Desiree Clary). Although the Queen isn’t known to have ever worn it, we know it was in her possession thanks to a detailed inventory of her jewellery, which includes a description of the parure.
Following her death, the parure came into the possession of Josephine of Leuchtenberg, the wife of Desideria’s only son, Oscar I of Sweden. The next mention of the parure can be found in the jewellery inventory of Sofia of Nassau, the wife of Oscar II of Sweden.

After Sofia’s death in 1913, her heirs decided to donate the set to the Nordic Museum, presumably because no one wanted such a dated piece. Incidentally, Queen Sofia also had another unusual parure made of gold and lave which is now (as far as we know) in the possession of her great-great-granddaughter, Desiree of Rosenborg (daughter of Count Flemming of Rosenborg, himself son of Princess Margaretha of Sweden, daughter of Prince Carl, Duke of Vastergotland, son of Sofia of Nassau).
There is a very similar parure of malachite and pearls that originated in France as well and belonged to Empress Josephine; that set consists of a tiara, a necklace, two bracelets, a pair of earrings, a brooch and six hairpins – all but two hairpins set with cameos of carved malachite. That parure is now in the possession of the Napoleon Foundation.

I honestly can’t understand how anyone could give away this magnificent parure. I mean, it’s a work of art! In a way, it reminds me of the famous Swedish Cameo Tiara and I'm fairly certain someone like Silvia or Victoria would have looked splendid in it.
And just a note: if you find yourself in Stockholm before May of this year, you have a chance to visit the exhibition in Nordic Museum and view this parure (and many other jewels) live.

Credit for information and pictures: Trond Noren Isaksen (I strongly recommend visiting his excellent blog), Nordic Museum, and RJWMB.
Posted by Unknown at 12:23 AM